While features like timeouts, retries, and custom health checks are present in most implementations, their details vary since there are no standards (RFCs) around them. This makes these features less portable. So instead of pulling these into the API, we offer a middle ground: a standard way to plug these features in the API and offer a uniform UX across implementations. This standard approach for policy attachment allows implementations to create their own custom policy resources that can essentially extend Gateway API.

Policies attached to Gateway API resources and implementations must use the following approach to ensure consistency across implementations of the API. There are three primary components of this pattern:

This kind of standardization not only enables consistent patterns, it allows future tooling such as kubectl plugins to be able to visualize all policies that have been applied to a given resource.

Attaching policy to Gateway resources for ingress use cases is relatively straightforward. A policy can reference the resource it wants to apply to. Access is granted with RBAC - for example, anyone that has access to create a RetryPolicy in a given namespace can attach it to any resource within that namespace.

To build on that example, it’s possible to attach policies to more resources. Each policy applies to the referenced resource and everything below it in terms of hierarchy. Although this example is likely more complex than many real world use cases, it helps demonstrate how policy attachment can work across namespaces.

Although there is a great deal of overlap between ingress and mesh use cases, mesh enables more complex policy attachment scenarios. For example, users may want to apply policy to requests from a specific namespace to a backend in another namespace.

Policy attachment can be quite simple with mesh. Policy can be applied to any resource in any namespace but it can only apply to requests from the same namespace if the target is in a different namespace.

At the other extreme, policy can be used to apply to requests from a specific workload to a backend in another namespace. A route can be used to intercept these requests and split them between different backends (foo-a and foo-b in this case). 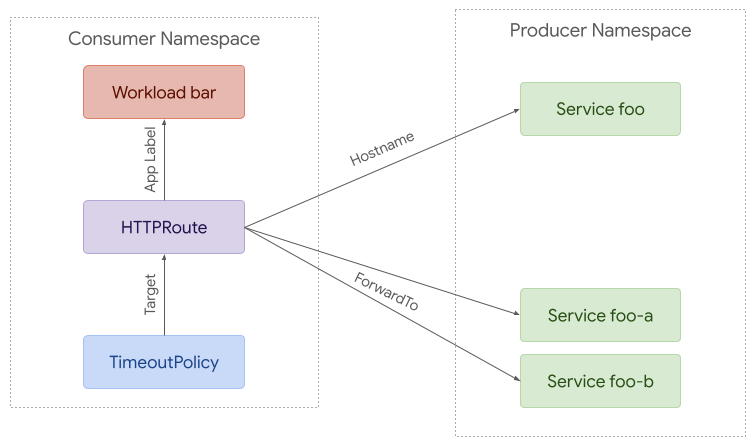 Each Policy resource MUST include a single targetRef field. It MUST not target more than one resource at a time, but it can be used to target larger resources such as Gateways or Namespaces that may apply to multiple child resources.

The targetRef field MUST be an exact replica of the PolicyTargetReference struct included in the Gateway API. Where possible, it is recommended to use that struct directly instead of duplicating the type.

The following structure MUST be used as for any Policy resource using this API pattern. Within the spec, policy resources may omit Override or Default fields, but at least one of them MUST be present.

Each policy MAY include default or override values. Overrides enable admins to enforce policy from the top down. Defaults enable app owners to provide default values from the bottom up for each individual application. 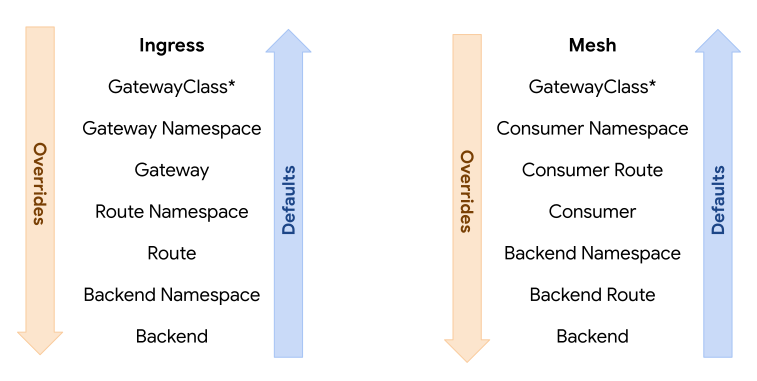 To illustrate this, consider 3 resources with the following hierarchy: A (highest) > B > C. When attaching the concept of defaults and overrides to that, the hierarchy would be expanded to this:

Note that the hierarchy is reversed for defaults. The rationale here is that overrides usually need to be enforced top down while defaults should apply to the lowest resource first. For example, if an admin needs to attach required policy, they can attach it as an override to a Gateway. That would have precedence over Routes and Services below it. On the other hand, an app owner may want to set a default timeout for their Service. That would have precedence over defaults attached at higher levels such as Route or Gateway.

If using defaults and overrides, each policy resource MUST include 2 structs within the spec. One with override values and the other with default values.

GatewayClass may be the trickiest resource to attach policy to. Policy attachment relies on the policy being defined within the same scope as the target. This ensures that only users with write access to a policy resource in a given scope will be able to modify policy at that level. Since GatewayClass is a cluster scoped resource, this means that any policy attached to it must also be cluster scoped.

GatewayClass parameters provide an alternative to policy attachment that may be easier for some implementations to support. These parameters can similarly be used to set defaults and requirements for an entire GatewayClass.

In some cases (likely limited to mesh or egress) users may want to apply policies to requests to external services. To accomplish this, implementations can choose to support a reference to a virtual resource type:

To help improve UX and standardization, a kubectl plugin will be developed that will be capable of describing the computed sum of policy that applies to a given resource, including policies applied to parent resources.

Each Policy CRD that wants to be supported by this plugin will need to follow the API structure defined above and add a gateway.networking.k8s.io/policy-attachment: "" label to the CRD.

In the future, we may consider adding a new Policies field to status on Gateways and Routes. This would be a list of PolicyTargetReference structs with the fields instead used to refer to the Policy resource that has been applied.

Unfortunately, this may create more confusion than it is worth, here are some of the key concerns:

Although these concerns are not unsolvable, they lead to the conclusion that a Kubectl plugin should be our primary approach to providing visibility here, with a possibility of adding policies to status at a later point.

Both Policy attachment and custom Route filters provide ways to extend Gateway API. Although similar in nature, they have slightly different purposes.

Policy attachment is more broad in scope. In contrast with filters, policies can be attached to a wide variety of Gateway API resources, and include a concept of hierarchical defaulting and overrides. Although Policy attachment can be used to target an entire Route or Backend, it cannot currently be used to target specific Route rules or backend references. If there are sufficient use cases for this, policy attachment may be expanded in the future to support this fine grained targeting.

The following guidance should be considered when introducing a custom field into any Gateway controller implementation:

1. Use core or extended fields if available¶

For any given field that a Gateway controller implementation needs, the possibility of using core or extended fields should always be considered before using custom policy resources. This is encouraged to promote standardization and, over time, to absorb capabilities into the API as first class fields, which offer a more streamlined UX than custom policy attachment.

2. Custom filters and policies should not overlap¶

Although it's possible that arbitrary fields could be supported by custom policy, custom route filters, and core/extended fields concurrently, it is strongly recommended that implementations not use multiple mechanisms for representing the same fields. A given field should only be supported through a single extension method. An example of potential conflict is policy precedence and structured hierarchy, which only applies to custom policies. Allowing a field to exist in custom policies and also other areas of the API, which are not part of the structured hierarchy, breaks the precedence model. Note that this guidance may change in the future as we gain a better understanding of how extension mechanisms of the Gateway API can interoperate.