In the past, we've seen that forwarding traffic across namespace boundaries is a desired feature, but a safeguard like ReferencePolicy, vulnerabilities can emerge.

When discussing the process of creating cross-namespace object references, this document and the documentation on the API itself talk about the object being referred to using the name "the referent object", using the meaning of "referent" to be "the person, thing, or idea that a word, phrase, or object refers to".

In order to bring cross-namespace references under the control of the owner of the referent object's namespace, the Gateway API has a ReferencePolicy object that must be created in the referent namespace for the reference to be successful.

To put this another way, if an object is referred to from outside its namespace, the object's owner must create a ReferencePolicy object that describes how that reference is allowed. This page explains how this process works.

To ensure that Gateway API is able to safely provide this functionality, we need to enforce a handshake mechanism that requires resources in both namespaces to agree to this reference. To accomplish that, a ReferencePolicy resource has been introduced. 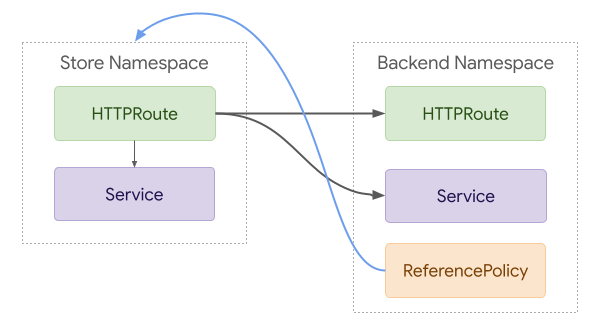 With this model, Routes are able to directly reference Services in other namespaces. These references are only considered valid if a ReferencePolicy in the target namespace explicitly allows it.

The following example shows how a HTTPRoute in namespace foo can reference a Service in namespace bar. In this example a ReferencePolicy in the bar namespace explicitly allows references to Services from HTTPRoutes in the foo namespace.

While the API is simplistic in nature, it comes with a few notable decisions:

Please see the API Specification for the details of the object's behavior.

There are some situations where it MAY be acceptable to ignore ReferencePolicy in favor of some other security mechanism. This MAY only be done if other mechanisms like NetworkPolicy can effectively limit cross-namespace references by the implementation.

For an example of the risks involved in cross-namespace references, refer to CVE-2021-25740. Implementations of this API need to be very careful to avoid confused deputy attacks. ReferencePolicy provides a safeguard for that. Exceptions MUST only be made by implementations that are absolutely certain that other equally effective safeguards are in place.

That is, all implemenations MUST use this flow for any cross namespaces in any of the core xRoute types, except as noted in the Exceptions section above.

Other "ImplementationSpecific" objects and references MUST also use this flow for cross-namespace references, except as noted in the Exceptions section above.