Each new release of Gateway API is defined with a "bundle version" that represents the Git tag of a release, such as v0.4.0. This contains the following:

Within Gateway API, API versions are primarily used to indicate the stability of a resource. For example, if a resource has not yet graduated to beta, it is still possible that it could either be removed from the API or changed in backwards incompatible ways. For more information on API versions, refer to the full Kubernetes API versioning documentation. 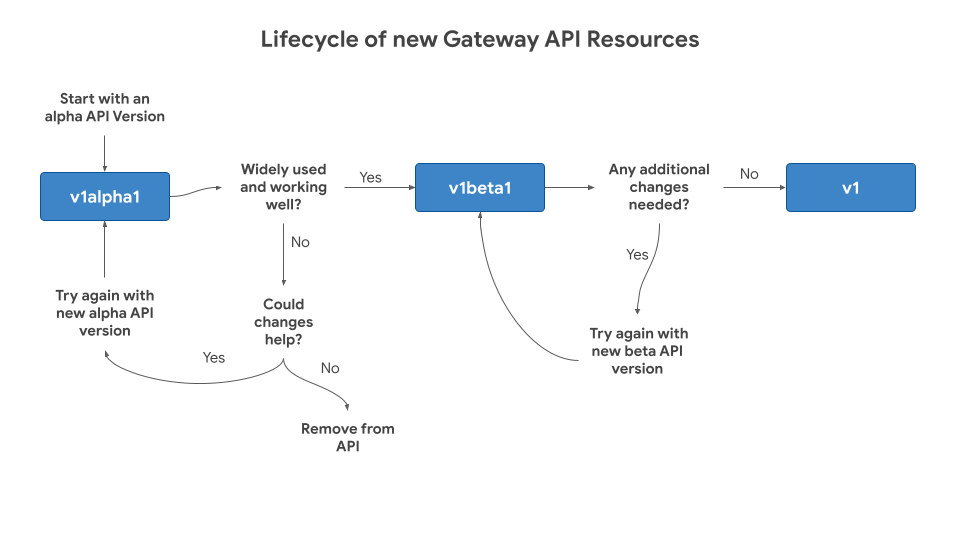 Gateway API provides 2 release channels: an Experimental one and a Standard one.

Release channels are used to indicate feature stability within Gateway API. For example, even if a resource has already graduated to beta, we need a way to test out new fields and features before committing to their long term stability. With upstream Kubernetes APIs, this is accomplished with feature gates. Unfortunately, CRDs do not have a similar concept yet.

Each CRD will be published with annotations that indicate their bundle version and channel:

When using or implementing this API, it is important to understand what can change across API versions.

A resource to graduate from alpha to beta must meet the following criteria:

A resource to graduate from beta to GA must meet the following criteria:

As described above, field level stability is layered on top of beta and GA resources (no fields in alpha resources can be considered standard). The requirements for a field to graduate from experimental to standard depend on the API version of the resource it is a part of. For a field to be considered standard, it needs to meet the same criteria of the resource it is contained in.

This project will have frequent updates to the main branch. There are no compatibility guarantees associated with code in any branch, including main, until it has been released. For example, changes may be reverted before a release is published. For the best results, use the latest published release of this project.

We do not provide stability guarantees for source code imports. The Interfaces and behavior may change in an unexpected and backwards-incompatible way in any future release.